Michelangelo’s depiction of Mary holding the body of her dead Son, “The Pietà,” is one of the world’s greatest works of art. I just read an essay by a woman who told how it was instrumental in her conversion to Christianity. So I thought it would be appropriate to contemplate for Good Friday.

One can appreciate the sculpture for its stunning artistry–how its 24-year-old artist makes stone drape like cloth; the dynamic triangular composition; the synthesis of classical form and Renaissance naturalism. Critics have observed that the figures are out of proportion–Mary is too big and Jesus is too small–and that Mary appears younger than she would have been–but such complaints only disclose more levels of the artist’s genius. Michelangelo was not trying to anticipate photography but to make an artistic point: The effect is to remind us of the young Mary cradling the young Jesus when He was a child, but now she is holding His dead body after He has been crucified. Christmas and Good Friday come together.

That poignancy is only part of this work’s emotional impact. Jesus’ body, while tastefully not shown realistically as tortured, is so limp, His head lolling back, and so physical, his muscles and veins rendered with anatomical precision, underscoring that this is definitely a dead body. And Mary’s face is ineffably sorrowful, yet also serene and sublime. And what is that gesture with her left hand? She seems to be offering Him to us. 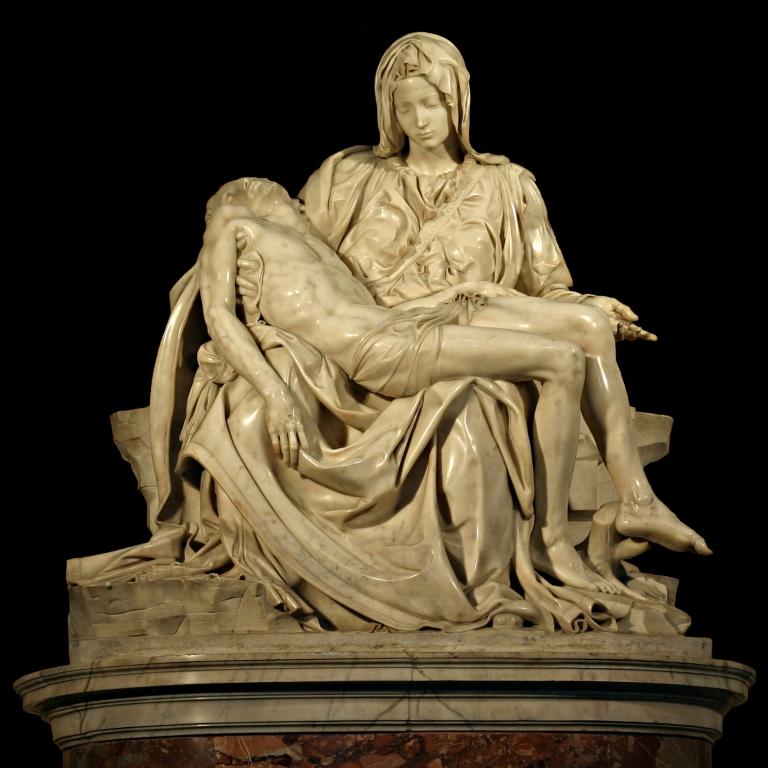 Michelangelo titled his sculpture not “Mary and Her Dead Son” but, following the artistic genre, “The Pietà,” that is, “the pity,” though the Italian does not have the weak connotations the English does. Think “The Compassion,” or, “The Mercy.”

So are we supposed to feel pity for Jesus and for His mother? That’s certainly the effect of the sculpture, but that isn’t the full meaning. Mary isn’t shown in anguished mourning, with Jesus as a tortured victim, as in other works on the same subject. “The Pity,” compassion, mercy are for us. “God so loved the world, that he gave his only begotten Son, that whoever believes in him should not perish but have eternal life.”

You don’t have to be Catholic or venerate Mary to appreciate this masterpiece of Christian art, which is housed in St. Peter’s Basilica at the Vatican. I was struck by the impact this work had on two women who saw it.

First, the Jewish woman who converted to Christianity. She tells about seeing the statue at the New York World’s Fair, where it was on loan from the Vatican in 1964-1965, when she was 9 years old. From Myra Kahn Adams:

Finally, we entered the pavilion stepped onto a moving walkway, and I remember being awestruck by the most beautiful statue I had ever seen. It now sounds implausible to write that I did not know the name of the dead man lying on the woman’s lap or the story depicted in the sculpture. Ignorance aside, the Pietà spoke to me. There was no “voice,” but I felt an imprint on the fabric of my soul with a riveting, “you will never forget this” moment. (And of course, I never have.) Looking back, it was as if a seed had been planted. Eleven years later at age 20, the “seed” blossomed, and I converted from a non-practicing Jew to a practicing Christian.

So what am I saying, and why am I telling you this?

Let’s start slowly. Regardless of one’s religious beliefs, it is nearly impossible to look at the Pietà and not experience overwhelming grief and sorrow for a mother who just lost her son. Michelangelo’s masterpiece packs such an emotional punch that you can almost see tears streaming down the marble. So powerful is the sculpture that you never forget seeing or feeling it. . . .

The power of the Pietà is that it radiates the greatest power in the universe — the love of Christ.

She didn’t really become a Christian from seeing a visual image. “Faith comes from hearing, and hearing through the word of Christ” (Romans 10:17). As she says, she didn’t even know who that dead man on the woman’s lap was. She had to hear about Christ by means of language, which came later. But remembering the sculpture, though years later, helped her to realize and appreciate the love of Christ. (The author is kind of confused, saying that despite Christ’s death, He did not die–meaning, I suppose that He didn’t stay dead–and that even those who do not believe have His spirit, showing the continuing importance of The Word.)

Here is another reaction to the Pietà, this time a young mother, who describes being in St. Peters with her three-month-old son, taking him out of his stroller amidst the crush of the tourists, then seeing the statue. From Annemarie Keiderling:

I had seen photographs of Michelangelo’s Pieta, but had forgotten that it would be here. Its power was overwhelming and drew me like a magnet. I walked up close. Here was a mother just like me, and in her face I could see the same passion of love, a love beyond explaining and like no other, that I felt for my own child. But in her face was also a suffering I had never known. I remembered the “sword that cut through her heart” and I held my son closer, wondering how she survived it. . . .

But there is something else in Mary’s face. I see her love and her pain, but I also see deep reverence. The body cradled in her lap is her child, but also her God. She knows she is holding a soul of greatness as far beyond the wretchedness that killed him, as the sky towers over a clod of earth.

In her face is the promise of Easter and of resurrection.

Login to quote this blog

You cannot quote because this article is private.