We all love stories. I haven’t met a human that doesn’t. Whether our stories entertain us through movies, books, TV shows, fine art, or lyrics, it is one thread of life that we all spin. Humanity has evolved through messages brought through this simple yet divine act of storytelling. The meaning derived depends on the listener, yet, an artistic story is near impossible to corrupt because art isn’t so obvious on the surface. It is often a forgotten trait of Jesus; that he was a writer, a storyteller, an artist.

If Jesus were here today, in the modern world of written word and the internet, I have no doubt that he would be a writer. Perhaps he would blog his parables, or make memes of his unique teaching quotes on Instagram, using the hashtag #writersofinstagram. He was an artist, and all artists desire to share the truth that lives inside of them.

Storytelling is the Divine’s genius way of bringing forth progressive ideas of the human consciousness. Where would we be without fairytales?

We learned not to lie through ‘Pinocchio’.

We learned never to judge a person by the way they look through ‘Beauty and the Beast.’

We learned not to talk to strangers through ‘Little Red Riding Hood.’

Storytelling is an example of the Spirit still speaking. God isn’t done speaking, nor is God done creating a better world. We can change the world through art, just as Jesus brilliantly knew, which is why he spoke his truth through parables.

Man cannot corrupt a story. They can try, however, it is pretty difficult unless the corrupt are keenly aware of how to change a story to such a degree as to destroy the deeper meaning. The mystics, other artists, and other right brain humans can interpret the deeper truth. Artists see art and it’s second nature to get inside the story and dig up the core. This is why most artists do not fare well in boxes made up by society. There is not a cage big enough to contain us. We cannot exist in closets nor can we live our days in silence.

This is, I believe, what has caused the divide between the religious and non-religious/progressive religious. It is a shame, really, because the core of Christianity was born with a freethinking, secular humanist within his Jewish community. He spoke of radical ideas for the human that did not fit neatly into the Jewish religion. He blew their minds with words they had never heard before. Teachings of love, grace, forgiveness, healing the sick, caring for the poor, welcoming the neighbor/foreigner, and most revolutionary-non-violence.

“Christians should be aware of candidates who call themselves progressive. Progressive is generally just a code word for someone who leans toward socialism, who does not believe in God, & who will likely vote against Godly principles that are so important to our nation.”

As a person that was raised to worship and love Jesus, and stick up for Jesus, I am lost on this assessment of Progressives. Religion has taken over the message of Jesus, and all it is doing is causing division and harm. I cannot choose religion because more often than not, religion does not choose humanity. If it isn’t what is best for the human, it isn’t what is best for me, because first and foremost I am a human, as was Jesus.

However, with all of this corruption and defacing the figure of Jesus, there is hope. Art cannot be corrupted. The parables speak for themselves, the message lives on, and love is the answer. We can stay in peace, and believe that we can move mountains blocking humanity and the world from thriving. 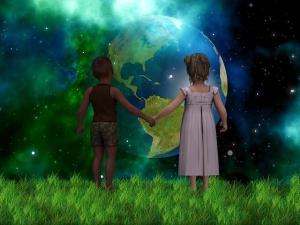 And remember, Matthew, Mark, Luke, and John were also artists.

Maybe you are too. Maybe we all are, perhaps we all possess the ability to shape a better world, but first, we have to get out of the boxes that were built around us.

« Question Friday: What’s Your Favorite C… The Pietà and the Love of Christ »
Profile

Login to quote this blog

You cannot quote because this article is private.